Okay I am a bit late for Canada Day! I noticed last week that July 1 was Canada Day. How I have never known this before escapes me. Of course I know that July is big on national celebrations like Bastille Day and US Independence Day, but this one has escaped me up till now. I thought I should make a dish in celebration; just for solidarity you understand. I am not Canadian and don't know any Canadians, but I felt it would be a nice gesture. Apparently it celebrates the anniversary of the enactment of the British North America Act 1867 which united 3 colonies into a single country within the British Empire. Interestingly Quebec has their own National Holiday celebration on June 24, which must cause some conflict here and there when organising events.

Well, I had good intentions last week but other priorities caught up with me so I didn't get around to making this creamy dessert till this week! A friend from Tasmania was up for a few days and coming over to dinner, so I killed 2 birds with one stone and made this for dessert. She has a few health issues at the moment and could only taste one mouthful, but I guess the good thing was that Mr Pickings and I got to eat more of it:) I have had to do some thinking about food and what and how people eat lately, as we had a vegan friend staying last month so we had to change our diet somewhat to accommodate her. For our Tassie friend we had to make sure the food was plain and simple; nothing too hot or spicy or inflammatory. We ended up having baked salmon and cous-cous and salad- very tasty and easy on the digestion. And this sweet dessert was a lovely finish to the meal. I found the recipe on the Toronto Sun amongst some other maple syrup dishes.

Put the maple syrup, egg yolks and cornflour In a heatproof bowl over a bain marie (ie place the bowl over a saucepan which has a couple of inches of simmering water in it

Whisk together the maple syrup, egg yolks and cornflour in the bowl

Keep whisking gently until mixture lightens in colour and thickens enough to coat back of spoon, about 6 minutes.

Beat cream to firm peaks. Stir about a third of cream into maple mixture. Spoon the remaining cream over maple mixture and fold together until it is an even colour- don't go crazy with the stirring; just till nicely mixed

Spoon into small dishes or bowls. Cover and refrigerate until set, about 6 hours.


I didn't have any rum in my kitchen so I used 1 tsp of rum essence and 1 tsp of my home-made vanilla extract. This gave it a lovely taste without being too rummy! 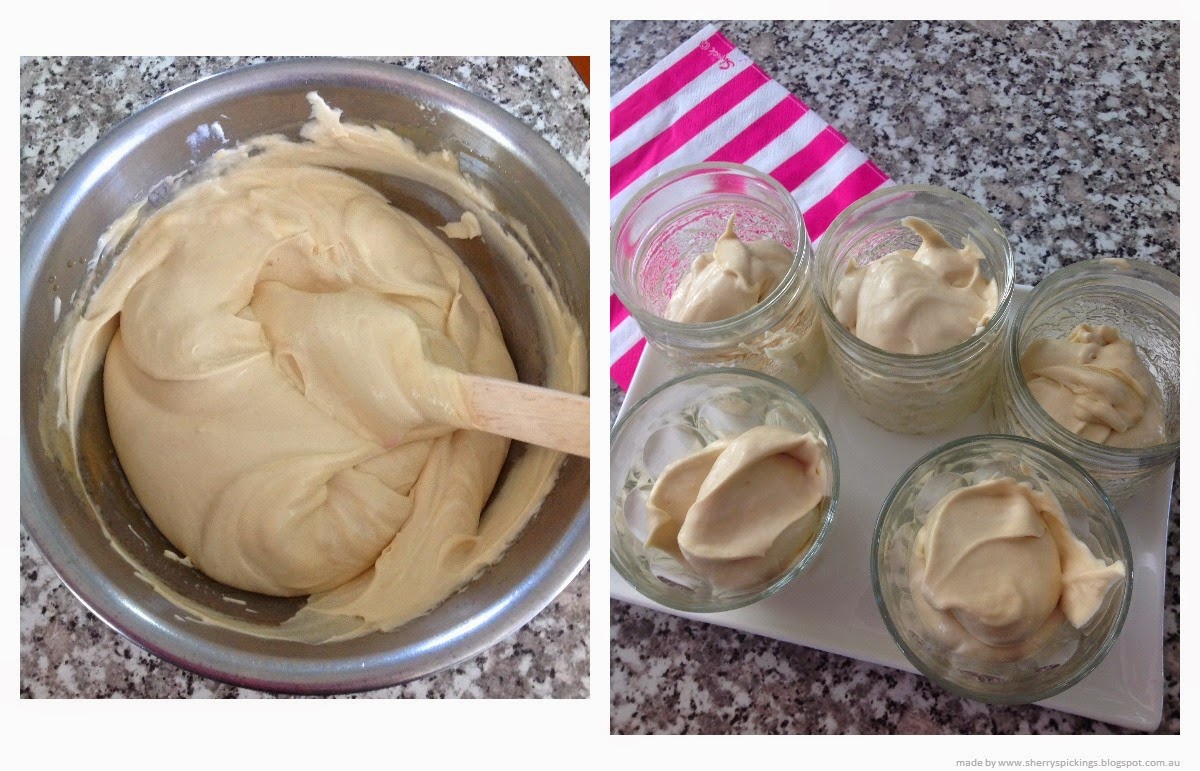 Tip:  place the egg whites in a freezer bag and they can go in the freezer for 3-6 months.