A former work colleague and I recently tootled off to see a Peter Churcher exhibition, which included that incredibly moving portrait of his mum Betty as she lay dying in hospital.  She instructed him to make it realistic, so he has depicted her looking weary, but unafraid of death.  Many of the paintings were of young, half-naked men in streams of glorious light.  As my friend pointed out, these looked brilliant when you stood at a distance and took in the splendid glow.  After absorbing the beautifully executed artworks, we then decided to head to The Balfour Kitchen nearby which is part of the Spicers Balfour Hotel in New Farm.  They cater for hotel guests and casual visitors, so we were able to partake of the delectable dishes on the menu.  The restaurant (and hotel) is in a lovely old Queenslander house, set in a leafy garden. Even though it is close to the CBD, and near a busy part of Brisbane, there was a sense of serenity and calm as we settled down to lunch.  I took delight in checking out the other patrons; among others, there was a couple consisting of a younger (married) man - (I saw his ring), and an older woman who did not appear to be his wife.  I watched them surreptitiously, though I did see her glance my way once or twice.  Maybe she thought I was taking photos of them, rather than the food!  The hotel is painted dark grey, which sounds odd especially for sunny Brisbane, but in fact it worked well, somehow making the green leaves of the trees stand out even more. 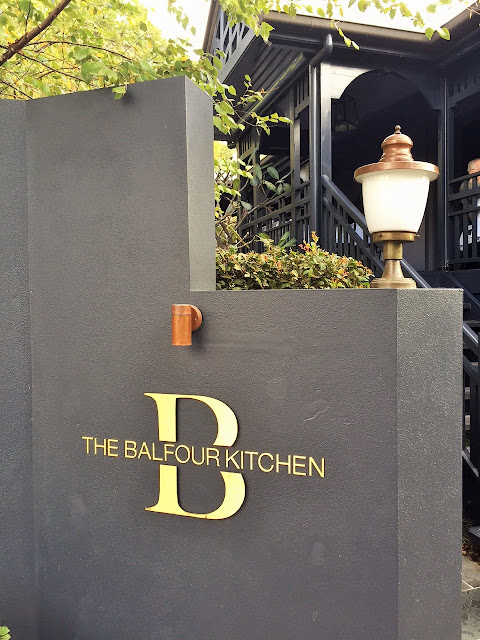 Interestingly, they had linen table napkins, but paper table-cloths.  And very sensible too!  My lean friend is on a special eating plan (to do with health rather than weight), so I indulged alone in main and dessert while he stuck to a main.  You can see why he is lean, and I am mmm...not.  He ever so sensibly started with a pot of tea while I had a glass of Sauvignon Blanc.

I love the flavours of rosewater and lychee so this was a real winner for me.  And it was "petite" so no need to justify having dessert:)  Not that I ever feel the need to do that.  Yes there was the dreaded kale, but not too much so I managed to scoff it down.  Service was unobtrusive, and friendly enough.
The chef brings an interest in Indian food to his dishes, so there was a slight leaning to exotic spices and Indo-Pacific hints.  We both enjoyed our meals, which were well-cooked and tasty.  The Kitchen is open for breakfast, lunch and dinner, every day except Sunday night.