Wow! It's International Scone Week again.  Where did that twelve months go, my friends?  And hasn't it been interesting/scary/terrifying/invigorating/craaazzzyyyy?  I don't know whether I'm Martha or Arthur these days (as the saying nearly goes).
ISW started way back with Celia from the Fig Jam and Lime Cordial blog, and is currently maintained by Tandy from Lavender and Lime.  Everyone and anyone is welcome to join in; just make some scones, my friends, and check out Tandy's blog post to find out the finer details.  (But hurry, it finishes on the 16th!)
You are probably looking at my photo below, and saying 'That's not a scone!'  I found this recipe in a copy of The 21st Birthday Cookery Book of The Country Women's Association in Tasmania, first printed in 1957.  The name is Belgian Scone; no idea why as it seems to be an apple cake.  Delicious anyway, and it's in the spirit of ISW.  So I ploughed ahead! 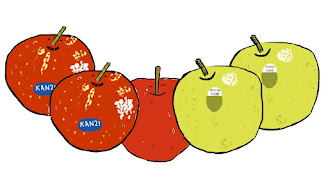 Serves 6, more or less:
ingredients:
1 tbs (20g.) butter
4 tbs (80g.) raw caster sugar
1 cup (150g.) self-raising flour, sifted
1/2 tsp mixed spice (or cinnamon or nutmeg)
1 large egg, lightly beaten
1/2 cup (140 mL) milk
Topping:
1 large apple, grated or finely sliced
3 tsp raw caster sugar
1/2 tsp nutmeg or cinnamon
Method:
Cream the butter and sugar in a medium mixing bowl
Add the flour, spice, egg and milk to the bowl, and beat well
Pour the batter into a 17.5cm or 18cm/7 inch cake tin, which you have greased on the sides and bottom, and lined with a round of baking paper
Now place the grated apple or slices over the top of the batter
Then sprinkle on the sugar and nutmeg
Bake at 180C/350F for 30-35 minutes till a skewer in the centre comes out clean
Let it cool on a wire rack for five minutes before (carefully) turning out
Notes:
I bet you're saying: 'Huh?  How come she's using cups and spoons?  And why is that half a cup of milk shown as 140 mL rather than 125?  And what about that flour?  Well, my friends, this book uses Imperial measurements, and not just imperial, but OLD imperial, which means a cup is about 284 mL!  Yep, just to make life that leeetle bit harder for bakers all over the world:-)
Use plain caster sugar if that's all you have, but the raw gives the cake a lovely hue and flavour
This recipe was provided by Mrs. J. H. Jones of George Town, which is a sweet little town in northern (ish) Tasmania.  Mrs. Jones did not say how long to bake it, other than: 'bake in a moderate oven'.  You had to know what you were doing in those days.  She also gave no directions for the topping, other than saying use apple, spice and sugar.
I had to laugh; the CWA President was Mrs. Crisp.  Seems very appropriate.  This scone cum cake is delicious!  So easy, and uses pantry ingredients.  Worth a go, my friends.  And feel free to join in #ISW2020.  Tandy is happy to see your interesting and unusual (or normal) scone recipes on her blog. 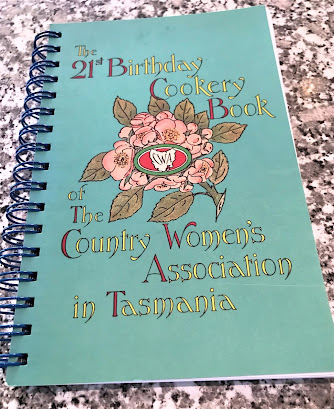