Ok- I confess to a great love of books, and food, and cooking, and did I say books?  And of course cookbooks, as my shelves testify.  And it seems that if you love food, you end up loving the history of food also.  I think many food bloggers would have a copy of Mrs Beeton lurking somewhere, and perhaps other historic food writers on their shelves.  I have lately got hold of a copy of Hannah Glasse's cookbook The Art Of Cookery Made Plain and Easy and so on ...let me tell you, the title continues for quite some time.  I love her confidence; her book "far exceeds any thing of the kind yet published".  This book was published in 1747, and according to Wikipedia, was one of the most important culinary references in the 18th century and into the 19th.  She apparently wrote it for use by domestic servants -"the lower sort"- in an easy to read style.  It seems that many of her recipes were taken from earlier works, as is the case with Mrs Beeton.  Plagiarism was alive and well with cookery writers it seems!
I first became interested in Hannah when I read Clarissa Dickson Wright's History of English Food.  Clarissa was a huge fan of Hannah's and felt that she had been sadly under-represented in food history.  She even made a doco for the BBC a few years before she died about Hannah Glasse's influence on British cooking. The copy I have is from Nabu Public Domain Reprints which scans (mostly) old library books so there are pages missing or library stamps on them; and you can see the edges of the book on each page that was scanned. It is very charming, and certainly feels like you have picked up a dog-eared old copy though it is a recent reprint.  It is presented in a very readable way; something that modern readers would recognise with a list of contents at the front and an alphabetical index at the back.  It is set out clearly in titled chapters, and even though it doesn't provide a list of ingredients at the start of each recipe, it certainly gives a clear indication of what and when and how much.  Alas, no pictures or drawings of the dishes!  And very sadly there is no existing depiction of Hannah at all so we will just have to imagine how sprightly and smart she must have looked.  She was 39 when the book was published which I suppose was quite old in those days.
There is certainly no namby-pambyness allowed here; if you are going to eat a food, you are going to catch it and cut off its head, take out its gizzards, crack its bones and slime its tenches!  Hang on, what is that?!  I think it means you actually de-slime it; i.e. wash off the slime from the fish- what, you didn't know that tench was a slippery fish and had to be de-slimed?  Shame on you.
My fave recipe starts with -take the turtle out of the water the night before and lay it on its back, in the morning cut its head off and hang it up by its hind fins...to bleed out; cut the fins off, take off the scales and cut out the guts- well you get the picture.  She did not ever say -first catch your hare -though that has been attributed to her and to Mrs Beeton and to Eliza Acton.  There is some mention of casing (i.e. catching) a beast then dispatching it so you can see where that may have come from.  I thought I would try one of her recipes to see how it stacks up in the 21st century; no not a beastly one just a simple dessert.
So here is my rendition of Orange Fool, which seems to be an orange version of a simple custard and quite delicious to boot!

6 oranges, juiced- it ended up being about 400mls  (try blood oranges for a modern twist)
6 eggs well-beaten
568 mls of cream (a pint measure)
125g caster sugar
cinnamon and nutmeg to taste

Place all the ingredients in a medium saucepan and mix well together
Stir and keep stirring till it thickens- be prepared, this took 15 minutes!
Once thickened, take it off the heat   - I recommend placing the pan into a sink of cold water
Throw in a knob of butter
Keep stirring till cold- and serve

I love this letter!  What a smart gal she was.  A bit like Jonathan Swift with his famous pamphlet A Modest Proposal which suggests that the children of the Irish poor are fattened up and fed to the rich land-owners thus solving more than one problem- i.e. too many children, not enough food and providing a healthy diet to the rich! 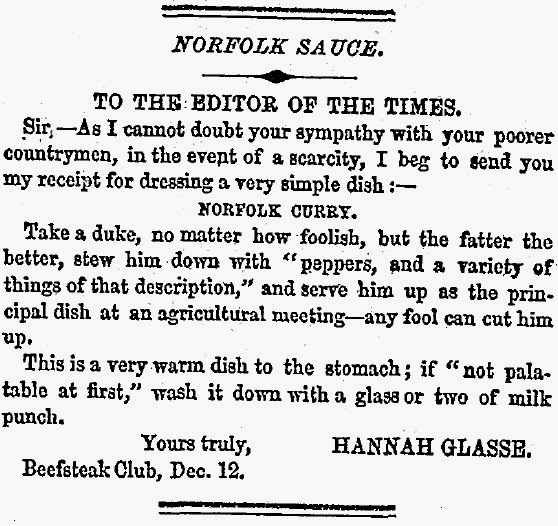