One of my (many) sisters'-in-law - or is that sister-in-laws? - had a birthday last week so she decided to head to Gerard's Bistro in Fortitude Valley for a birthday celebration.  Another sis-in-law was down from the tropical north, so it was definitely time for a celebratory dinner.  The birthday gal was hobbling on crutches due to a gammy knee, so we sat outside in the courtyard where there was a bit more room to manoeuvre.  Thank goodness we had booked some time ahead as the Masterchef episode with the head chef from Gerard's-Ben Williamson-had been on telly the night before. The waitress told us that the phone had been ringing off the hook since then, and instead of doing about 80 covers for a Wednesday night, they were doing 120, and were filling up with interstate visitors wanting to try out Ben's food.  I have to say we had a great dinner with amazing food, and the cost of the meal was actually better than I had expected for 8 people - always a bonus!  The one thing we all found a tad annoying is the over-complicated menu/ordering.  And when I say "all" I mean the waitress also:)  She was getting just a teensy bit fed-up with our prevaricating over the menu.  Hand on heart I say it was not our fault!  The menu is a jumble of sides and mains, and dishes for 2 or more, all thrown together on the menu and needing explanation by the afore-said waitress.  Imagine having to explain that over and over again to each table, with quizzical looks and puzzled queries from the punters.  So apart from that minor snafu, the meal went well.  We were slightly concerned that we would not feel well-fed, as the dishes are quite small (for 8), but by the end of the meal, we were all happy little chappies.  Our waitress warned us that the dishes would just come out higgledy-piggledy, in no particular order and as the chef made them.  This was because the dishes were meant to be shared, she told us sternly.  Fortunately we were all happy with this arrangement.

Sis-in-law from the Deep North and I started with a glass of Chandon Brut Vintage $13. As there were several drivers in the group and one person on (prescription) drugs, she and I were the only ones drinking!  Oh, and before I forget, just so you know, there are unisex toilets ( a pet peeve of mine).  I really hate being stared down by a snooty hipster boy when doing my ablutions.


The differing prices were dependent on the size and provenance of the various oysters.  I always love a beautiful fresh oyster which these were; buttermilk not really necessary for me.


This butter was delicious; I could happily have smeared it all over myself and had someone lick it off. No no, I mean I could lick it off.  Hmmph, enough of that sort of talk:)

This was a really tasty dish, with lots of flavour and texture.  We all liked it!


We are a family of brassica lovers, so this cauliflower dish went down well with us all.


The shallots come with charred onion consomme; only one of the 2 bowls we ordered came like this.  The other was consomme-less:)  Still great nonetheless; melting and unctuous.


This dish was light on the broccolini (sis-in-law said she found a piece) and heavy on the kale.  While it tasted fine, I am not so keen on kale so would have liked a bit more of the other green.  It was also heavily salted, too much for our tastes, which is saying something as I am a huge lover of salt.


These were so tasty I could have eaten more.  They were sweet and well seasoned, and very moreish.


Everybody adored the brisket; so tender, so flavoursome, so lip-smacking.


Sis with the gammy knee is a coeliac so genuinely can't have gluten; the restaurant was unable to provide any gluten free bread for her which I thought was a leetle bit unusual these days, especially as they state they are gluten free friendly on their menu.


By this time, I really did not want to see another pomegranate seed.  They seemed to be on every dish, and truthfully I don't find them terribly interesting or tasty.  But hey they are pretty for sure, and add a bit of crunch.


The younger eaters amongst us did not realise that they were partaking of sweetbreads so happily ate it all up.  They may not have been so keen if they knew, but clearly it was delicious as it all vanished down their eager mouths.  We even managed dessert after this eclectic and palate buzzing repast.


Fabulous cake!  Spicy and sweet with those interesting twirls of carrot to go with it.

I found the vanilla scented cheese a little too stiff in texture, but the other components of this dessert were delicious. You can't go past a beautiful raspberry sorbet!  The 8 of us shared 3 desserts but I wish we had ordered at least one more!  Okay yes I am greedy but they were so delicious that they didn't last long.  I think the interstate customers will be very happy once they have eaten here, and will find it well worth the trip. 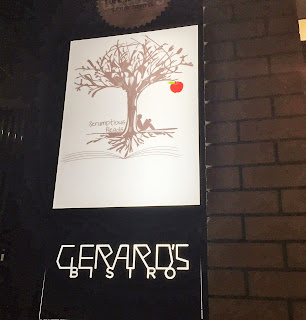